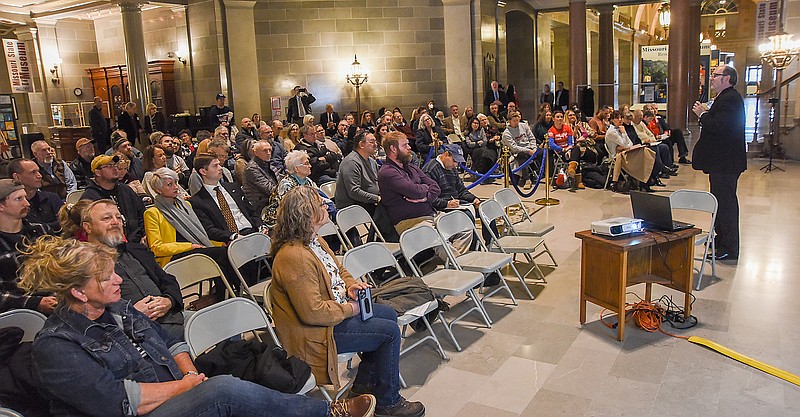 Julie Smith/For the Fulton Sun Douglas Frank delivers a presentation Thursday replete with data about elections statewide and nationwide, and what he has learned in studying voluminous information acquired from secretaries of state and county clerks at the state Capitol in Jefferson City. Frank encouraged Missouri residents to contact their local and state election officials to check the accuracy of voter rolls.

The "Let's Take MO Back" rally, as its organizers called it, brought about 50 people to the state Capitol on Thursday, exactly a year after supporters of former President Donald Trump stormed the U.S. Capitol in Washington, D.C., in an attempt to overturn the election and disrupt Congress from formalizing President Joe Biden's win.

The rally was headlined by Douglas Frank, a high school math teacher from Ohio who claims to have found algorithms that indicate the 2020 election was rigged. His claims have been widely discredited.

During his presentation Thursday, Frank reviewed election participation data with rally participants and said voter rolls in every state are inflated by 10 percent, claiming voter rolls are outpacing population data.

Keith Carmichael, a Missouri voter who has been a vocal proponent of election integrity reform, hosted the rally, inviting planned speakers and Missouri lawmakers to address the crowd.

Carmichael said he considers election reform to be the most important issue for state leaders to act on in Missouri and the rally encourages citizen participation in elections and government processes generally, noting the rally participants came to the Capital City to be engaged.

"I'm going to say that we have some priorities in this building this session and election integrity doesn't seem to be at the top," Carmichael told the rally goers. "And that's why you're here."

Missouri Canvassers, a relatively new organization made up of citizen volunteers who knock on doors in an effort to collect evidence of election fraud, provided rally attendees with supplies to write their lawmakers a note and information on how to join their cause.

"Politicians don't typically start parades, they join parades," Stacy said while addressing the rally. "You have to start this parade."

Stacy encouraged the demonstrators to maintain pressure on lawmakers throughout the legislative session if they hope to get any election security measures passed in Missouri.

Bills address a range of election reform issues, including photo ID requirements, switching to paper ballots and establishing a joint committee within the General Assembly to audit election results.

Although he said Missouri election results are accurate and there is no evidence the 2020 election was rigged, Ashcroft said he supports a host of new election reforms.

He also wants the state move to an entirely paper ballot system and wants the Legislature to grant his office expanded power to audit election results and voter rolls, as well as conduct cybersecurity testing at the local level.

Additionally, he said he wants the Legislature to develop new procedures to limit how much election authorities handle cast ballots and require them to maintain accurate, current voter rolls. He suggests the state should withhold funding if election authorities don't comply.

Ashcroft did not attend the rally Thursday, but said in a statement he supports the efforts of people working to ensure elections are accurate and secure.

Deb Curtis, a volunteer with Missouri Canvassers, said at the rally the state has an issue with outdated voter rolls, noting the organization has found at least 350 incidents of phantom ballots in Missouri since it was formed.

On Wednesday, Ashcroft created a countdown for how much time lawmakers have in the legislative session to pass election reform legislation.

Adding to an already packed agenda, Ashcroft also wants the Legislature to bar the state from adopting any changes to election laws or rules for 6½ months before a presidential election and prohibit the use of election equipment capable of connecting to the internet.

Ashcroft also supports eliminating ballot curing in Missouri, which allows absentee voters with an issue on their ballot, such as a missing witness signature, a chance to fix the error and still have their vote counted.

He is also a supporter of the recently passed Texas Election Integrity Protection Act, which requires voters casting mail-in ballots to provide identification, prohibits 24-hour voting, prevents election officials from sending mail in ballot applications to voters who don't directly ask for them, and puts restrictions on drive-thru voting and ballot harvesting.

He said the law, which is being challenged by the United States Department of Justice, can be a model for Missouri.

"There are many important issues Missourians need us to address this year, but priority number one must be to ensure that when the legislative session ends in May, we still have a democracy in this state," Quade said in a news release the first day of session. "That means opposing all forms of voter suppression. That means protecting the integrity of our elections to prevent those in power from overturning results they don't like. That means opposing the majority party's slide into authoritarianism."

"House Democrats are committed to strengthening our system of self-governance for future generations and will never sit idly by as others seek to tear it down from within," she said.

"It's been one year since violent traitors stormed the U.S. Capitol because they believed the 'Big Lie,'" Rizzo said. "The 'Big Lie' that continues to be pushed by elected officials right here in Missouri. Our nation is deeply divided, and it is the duty of every elected official to help heal this divide."