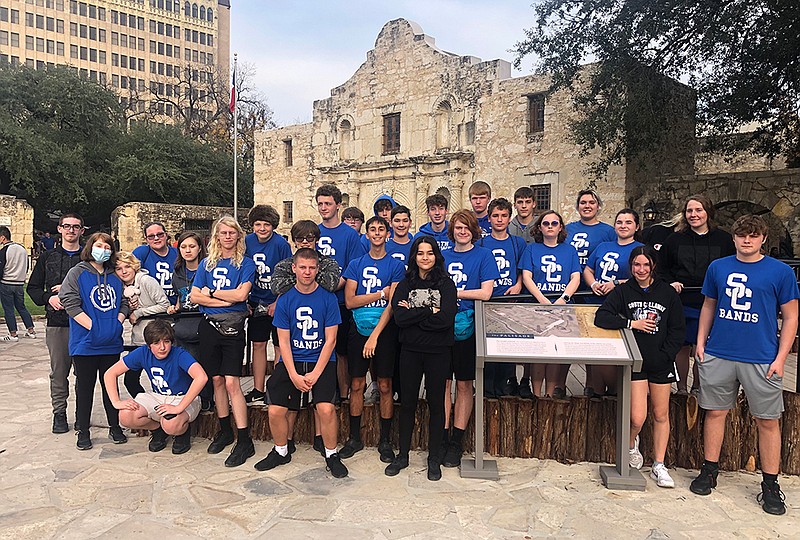 According to a press release, the Bulldog Pride Marching Band from South Callaway High School in Mokane was one of nine bands that performed in the mass band halftime finale at the 2021 Valero Alamo Bowl football game Wednesday at the Alamo Dome in downtown San Antonio, Texas.

South Callaway joined bands from Colorado, Oklahoma, Iowa, Nebraska, Kansas and even an additional band from Missouri to perform a medley of crowd favorite songs that featured “Sweet Caroline”, “Living on a Prayer”, “Don’t Stop Believin’” and “Y.M.C.A.” The 650 member combined “WorldStrides Band” rehearsed Tuesday and Wednesday morning to prepare for the performance.

In addition, the band was awarded “Best Field Show Drumline” — a major honor for the band.

Besides the performances, band members visited SeaWorld Texas, took a cruise on the San Antonio River in the Riverwalk District, took an elevator ride to the top of the Tower of Americas observation tower and toured the historic grounds of the Alamo.

The South Callaway Band Department is currently celebrating its 61st season. Originally, the band was scheduled to attend the Chicago Thanksgiving Day Parade in 2020 in honor of its 60th Diamond Jubilee Anniversary. However, when the ongoing COVID-19 pandemic canceled the Chicago event, WorldStrides — the company that sponsors the musical portion of the Chicago parade — reached out with a bid to attend the 2021 Alamo Bowl instead. Since WorldStrides sponsors both events, all fundraising efforts were switched over to the replacement event seamlessly.

Next for the Pride Band is the 2023 National Memorial Day Parade in Washington, D.C. The band was nominated by Senator Roy Blunt to represent the state of Missouri in this nationally televised parade in the heart of the nation’s capital.

The South Callaway Bulldog Pride Band is under the direction of Dustijn Hollon and is led on the field by Drum Majors Jessica Binkley and Sage Turner. The South Callaway Band Boosters are a parent-run organization. Their current board members include Jen Ayers, Janelle Wetherell, Heather Murphy and Sam Binkley.

For more information about the South Callaway Band Boosters, visit their Facebook page at www.facebook.com/scbandboosters