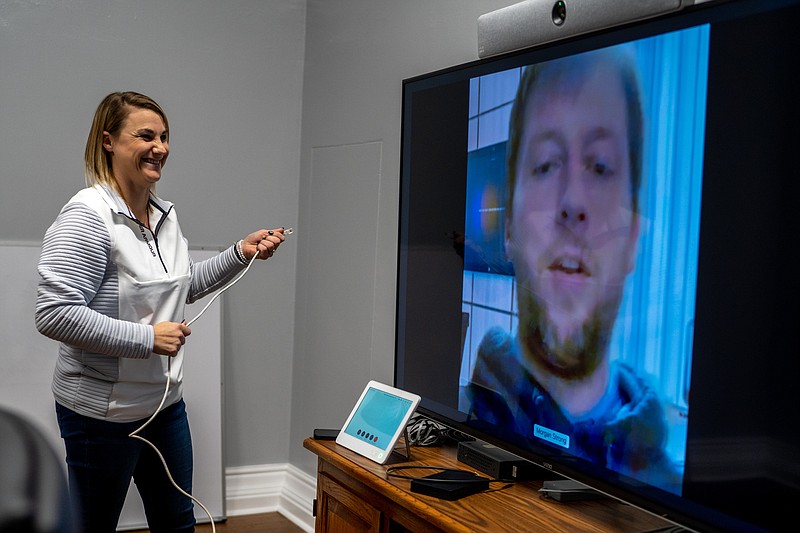 Ethan Weston/News Tribune Victoria Jansen laughs as Morgan Strong tests a conference room monitor on Thursday, Dec. 30, 2021 at the Missouri State Capitol Building in Jefferson City, Mo. The pair work IT and were getting the conference room set up.

Maps are on the minds of lawmakers as they return Wednesday to the Capitol.

In the Senate, congressional redistricting is expected to take up much of the focus at the start of the 101st General Assembly's Second Session, Republican and Democratic leadership said.

The General Assembly is responsible for creating maps to designate the state's new U.S. congressional districts following the 2020 census.

The COVID-19 pandemic delayed census results, and Gov. Mike Parson didn't call a special session on redistricting as some lawmakers were hoping. Now, the House and Senate have to pass a map under a tighter deadline as candidate filing begins Feb. 22. Missouri legislative leaders released their proposed map for congressional districts late Thursday afternoon.

Senate Minority Leader John Rizzo, D-Independence, also said he expects redistricting to be the major issue at the start of the session, noting lawmakers have to prioritize the issues directly in front of them.

Rizzo said he doesn't expect the redistricting process to be as contentious as previous years when the state lost seats.

Sen. Mike Bernskoetter, R-Jefferson City, is chairman of the Senate redistricting committee and said he's hopeful each chamber and party can agree on a map quickly.

Bernskoetter has pre-filed legislation to establish new congressional districts and move the primary candidate filing deadline from March to April.

"Caucus priorities will be largely focused on congressional redistricting and allocating the supplemental budget during the first part of session," Bernskoetter said. "Those are both contentious issues and will likely dominate our time, especially during the opening weeks and months."

A House commission somewhat met the Dec. 23 deadline to produce a tentative map for redrawing Missouri's state legislative districts, but couldn't settle on one and produced two.

"(Representatives) have made some headway. We've got some consensus," said Rep. Dave Griffith, R-Jefferson City. "A lot of people on my side of the aisle wanted to have some bipartisan input and be able to put politics aside. We want to do what's best for Missouri."

It happens every year. Lawmakers file legislation, trying to make it harder for voters to overturn their decisions, or to get things done when lawmakers fail to act.

About three years ago, lawmakers sat on their hands while voters asked for, then passed, medical marijuana.

Lawmakers have filed six joint resolutions (which, if passed by both the House and Senate, go to a ballot), each of which is meant to make it more difficult for initiatives to be approved or to pass.

Initiative petition reform is something everybody seems to be onboard with, said Rep. Rudy Veit, R-Wardsville.

"If you want to change the Constitution, it should not be on a whim," Veit added.

Plans for how to budget the state's record revenue and federal COVID-19 relief dollars will be another elephant in the room when legislators return Wednesday to the Capitol.

A supplemental budget (to fill voids that developed after the past session) is likely to come up soon in the session, Veit said. He anticipates legislators will also quickly tackle state pay raises the governor has proposed.

And Veit expects supplemental funds will be approved to cover additional costs that came about after the state Supreme Court said the state has to fund Medicaid expansion -- another initiative-passed change to the state Constitution.

Conservative lawmakers said last year that they didn't have to fund expansion because the initiative did not identify specific funding channels. However, the Supreme Court said it's the Legislature's job to fund the program.

Schatz said he's sure legislators will introduce supplemental budget items that will spark conversation and debate on the Senate floor early in the session.

Rizzo said he and other Democrats are considering many new opportunities for spending, including funding Medicaid expansion and infrastructure investments.

In early December, Parson proposed increasing to a $15 minimum wage for all state employees, paying for a 5.5 percent cost-of-living adjustment and funding wage compression compensation. (Compression happens when people with similar abilities or experience are paid differently. How this happens is that new hires for high-demand jobs get paid more than tenured employees because the market requires more pay to land the new employee. These situations may cause conflict in the workplace.)

In total, the measure would cost $91 million -- $52 million of which would come from general revenue.

Parson wants the funding approved within the first month of the session so it can be implemented Feb. 1.

The state employee pay increase has the support of Hegeman, who also serves as chairman of the Senate appropriations committee, and Bernskoetter, who said he fully supports the proposal.

"Our state continues to rank at or near the bottom in wages for our workers," Bernskoetter said. "With competition for employees in the private sector so high, worker shortages in our government will only get worse if we don't do something."

Tax cuts are another possibility under the bolstered revenue, lawmakers said.

Sen. Mike Moon, an Ash Grove Republican, has pre-filed three pieces of legislation related to taxation, including one to eliminate the corporate income tax and another that would reduce the top individual income tax rate in favor of taxing the endowments of colleges who do business with abortion providers.

Rizzo said Democrats would be open to cutting taxes for middle-class Missourians, but he thinks legislators should be focused on reinvesting the state budget on infrastructure and improving the way of life for people in the state.

In an effort to raise funding for infrastructure and transportation projects, the General Assembly passed a tax on motor fuel last session and Parson signed the measure into law.

In full effect, the tax should provide an additional $450 million in transportation funding and help the Missouri Department of Transportation more quickly address unfunded road and bridge needs around the state.

Less than a year after taking effect, however, the infrastructure funding the Missouri Department of Transportation is calling critical is under attack.

Rep. Sara Walsh, R-Ashland, pre-filed House Bill 1594, intended to repeal the new motor fuel tax. When she filed the bill in early December, she pointed out that voters have expressed their distaste for more taxes.

Walsh said any tax increase should be put before voters.

"We're sitting on record revenues and expecting billions from the federal government that can be used to fund roads and bridges," Walsh said Tuesday.

In the Senate, Moon has pre-filed legislation to repeal the gas tax the General Assembly passed last session, as well as the prescription drug monitoring program lawmakers approved last session. He said both are a priority for him this session.

Moon, a candidate for the 7th Congressional District, is part of the Senate's more conservative group, which consists of about seven members in total.

Republican leadership did not invite several Republicans in the Senate to a caucus meeting in mid-December to discuss session priorities. Moon was among those left out.

"Because of this oversight, the caucus will likely be further divided," Moon said.

Anticipating a potentially divided Republican party in the Senate, Moon said he will be concentrating on his priorities throughout the session.

Moon pre-filed legislation Dec. 1 to make abortion illegal in Missouri, define life as starting at conception and arm the Missouri attorney general with the power to enforce parts of the state's criminal code, including murder and manslaughter, as they relate to abortion.

"It is the intent of the General Assembly to provide to unborn children the equal protection of the laws of this state," Moon's bill states, "To establish that a living human child, from the moment of conception, is entitled to the same rights, powers, privileges, justice and protections as are secured or granted by the laws of this state to any other human person."

Additional pre-filed bills in the Senate aim to prohibit abortion after a heartbeat is detected and require physicians to provide information to people getting an abortion on what to do with the remains.

Three pre-filed bills would block state funds, including Medicaid funding, from going to abortion providers and their affiliates.

The same issue dominated the Senate and divided its Republican members during the last special session called to restore a tax that helps fund Missouri's Medicaid budget.

Moon is also looking to prohibit students from joining sports teams that don't match their assigned sex at birth, and ban hormone therapy and gender reassignment surgery for anyone younger than 18.

Another priority will be to pass legislation that would require the General Assembly to approve all state and federal rules and regulations before state agencies implement them, Moon said.

"We've seen a ton of bills on education reform," Veit said. "A lot of them have to do with single issues."

Several proposed bills concern Critical Race Theory (CRT). Critical Race Theory is an academic framework that looks at how race and racism affect politics, culture and law, and focuses on the idea racism is systemic and not only the product of individual biases or prejudice.

Legislators will have to walk a fine line, Veit continued, if they want school boards to retain control over their curricula.

Rep. Hardy Billington, R-Poplar Bluff, has prefiled HB 1457, which would prohibit the use of the 1619 Project in schools.

Rep. Nick Schroer's HB 1474 would create the "Parents' Bill of Rights," which would require schools to provide information to parents on what children are being taught, allow parents to visit school during school hours, and also prohibit the teaching of the 1619 project. Similar bills to Billington and Schroer's have been filed on the Senate side.

Critical race theory has drawn controversy at the local level at Jefferson City Board of Education meetings. Several residents have spoken in support and opposition to the concept, and the board has received numerous emails about it. The Jefferson City School District's official curriculum does not include critical race theory, but teachers are able to talk about it in class.

A few bills, like Rep. Ann Kelley's HB 1484 made broader prohibitions in curriculum. HB 1484 would prohibit "mandatory gender or sexual diversity training or counseling" for schools and prohibit aspects of courses that teach that "one race or sex is inherently superior to another race or sex; an individual's moral character is necessarily determined by the individual's race or sex; and an individual should feel discomfort, guilt, anguish, or any other form of psychological distress on account of the individual's race or sex," according to the bill summary. Similar bills were filed on the Senate side.

SB 645, sponsored by Republican Sen. Andrew Koenig, prohibits DESE from promoting curriculum, and requires local school boards to approve curriculum at least six months prior to implementation. It also would make all professional development and instructional materials public and freely available at an online portal.

HB 1776, by Rep. Marlene Terry, D-St. Louis, would make the State Board of Education require Native American and African American history, among other topics, in history curriculum.

Vaccines also came up a few times this year. Rep. Schroer's HB 1475 would prohibit schools from mandating COVID-19 vaccines. Rep. Koenig's SB 646 would prohibit both vaccine and mask mandates at schools and would make quarantine optional if a child is not positive or symptomatic. 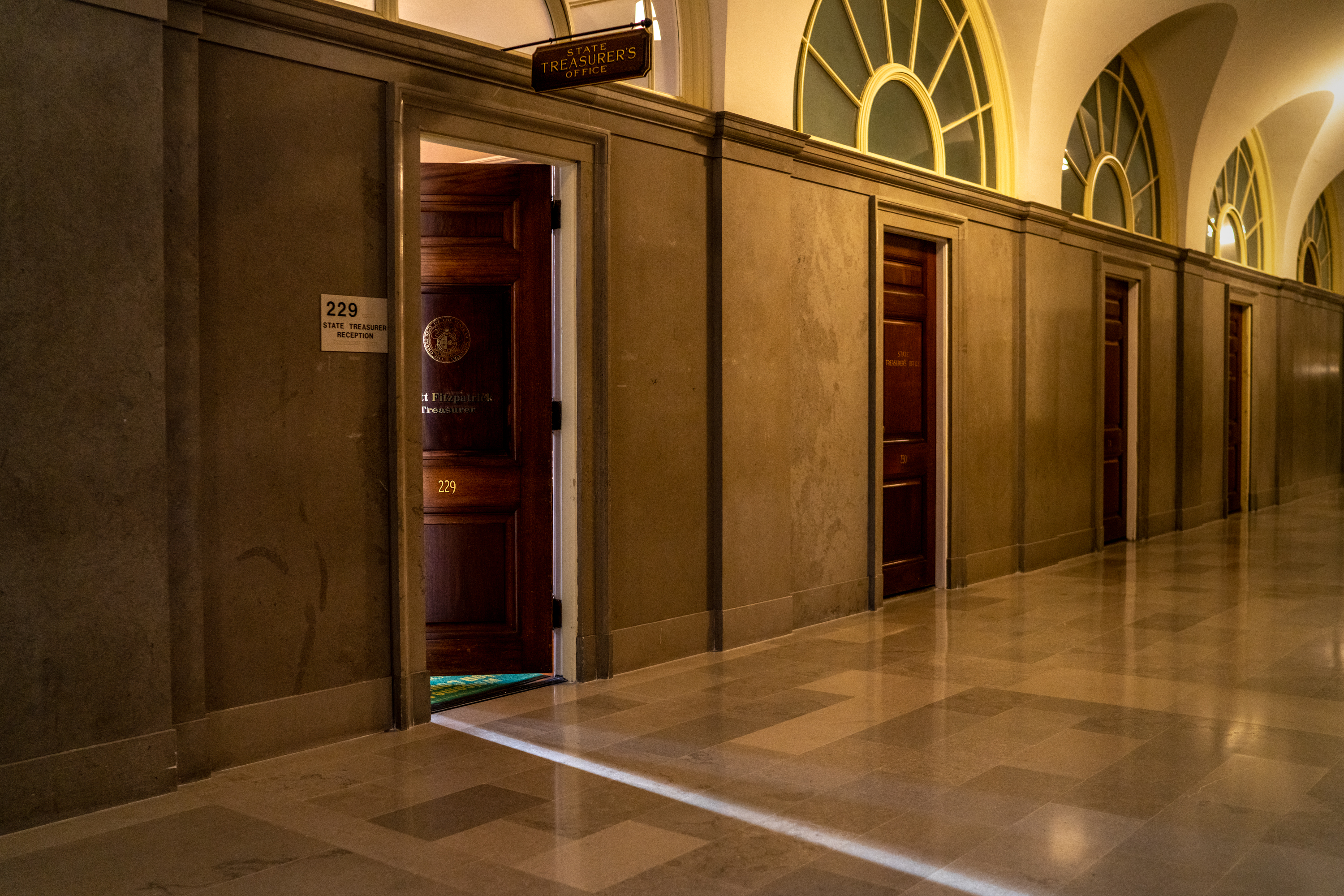