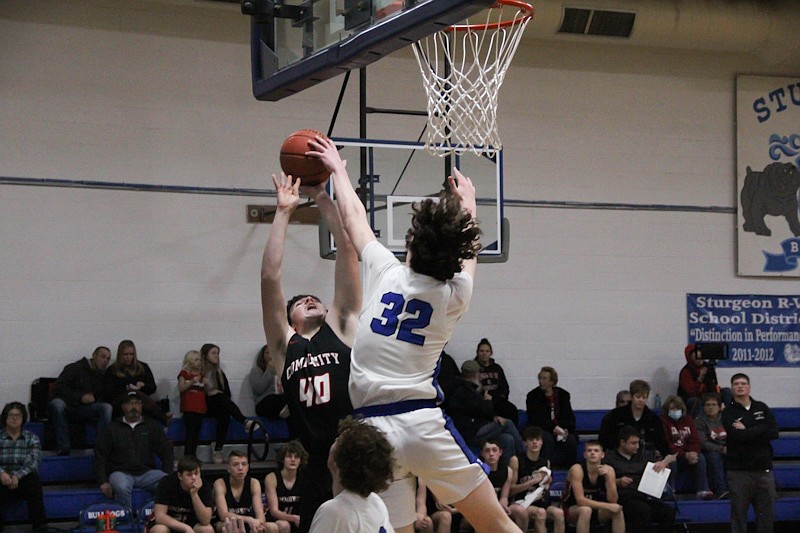 En route to a resounding victory, South Callaway boys basketball held Community to nine points in the first quarter and six in the second, then made six 3-pointers in the third quarter.

The first three quarters made for an easy fourth quarter, as No. 4 seed South Callaway beat No. 5 seed Community 57-36 in the opening round of the 39th Annual Sturgeon Tournament Tuesday evening at Sturgeon Middle School.

The Bulldogs dominated the three decisive quarters in a different way for each.

In the first quarter, South Callaway forced eight turnovers and scored 12 points off of them.

After the Trojans took their only lead at 4-3, the Bulldogs regained the advantage from Community's first turnover of the game. To gain the lead it held for the rest of the contest, Tayber Gray stole the ball from the Trojans, then JT Thomas made a layup in transition.

Thomas and Gray switched roles, as Thomas pickpocketed the ball on Community's ensuing possession before Gray hit a transition layup while being fouled. Gray made the and-1, which gave South Callaway an 8-4 lead.

Gray kept making plays throughout the game for the Bulldogs; he finished the contest with a game-high 22 points while recording six steals.

Not one who's known to make 3s, Loucks drained two 3-pointers in the game. Additionally, Loucks had a double-double Tuesday, notching 12 points and 10 rebounds.

The Bulldogs needed someone like Loucks to excel on both sides, as South Callaway scored less than 10 points in the second and fourth quarters, tallying nine in each.

At the start of the second quarter, South Callaway led by 10 points. The Bulldogs extended their advantage to as much as 15 before halftime.

During the second quarter, South Callaway's defense kept them in front by double digits. The Bulldogs pulled down six boards and had two steals while holding Community to six points in the quarter, which was three less than the Trojans scored in the first eight minutes.

"It's one of the keys we always have on the board, what we talk about in practice," South Callaway coach Seth Thomas said. "That's kind of where we want to live. Transition offense and then playing an up-tempo game. Just two different styles of play. They like to kind of slow down and play in the half-court. We really wanted to have them adjust us. And I think that's what we had to do, and I think whatever teams got the other team to kind of adjust to their pace and their style of play is who's gonna be successful. That just happened to be us."

Following the break, the Bulldogs had their best offensive quarter, scoring 20 points in the third. South Callaway scored 18 of those points from 3s, with Gray responsible for four of the Bulldogs' makes from deep.

The Bulldogs took their biggest lead of the third quarter when Gray pulled up and drained a 3 from the top right of the key, putting South Callaway up 45-20.

"He can impact the game and a lot of ways," Thomas said. "He's done that kind of all year defensively, offensively, and sharing the ball. They kind of sagged off, and then he made them pay there early. And usually, that's not the case with teams. And he really took advantage of that. He's a very smart player, recognizes how they were guarding him, and he stepped up and made the shots."

South Callaway's 3-point shooting in the third quarter all but secured a Bulldogs victory, as they led 48-27 heading into the fourth quarter.

The dominant start for South Callaway meant they had little work to do in the fourth quarter, as the Bulldogs slowed the tempo down and scored nine points; Community also had nine in the quarter.

South Callaway's rout of Community meant the Bulldogs are 3-for-3 in advancing to the championship bracket in their three tournaments this season. And with the result, South Callaway reached 10 wins on the season (10-8), while Community fall to 10-9.

"This is a great tournament, and there's a lot of great teams ahead of us -- they're all ranked," Thomas said. "We played a tough schedule. You want to be on that side to get yourself ready to play a high-quality opponent because the whole regular season is getting you ready for district play. And you're gonna see teams at this quality in districts, so you want to be on that side of the bracket."

"They're well coached and physical," Thomas said. "They've got some great size and some great players."