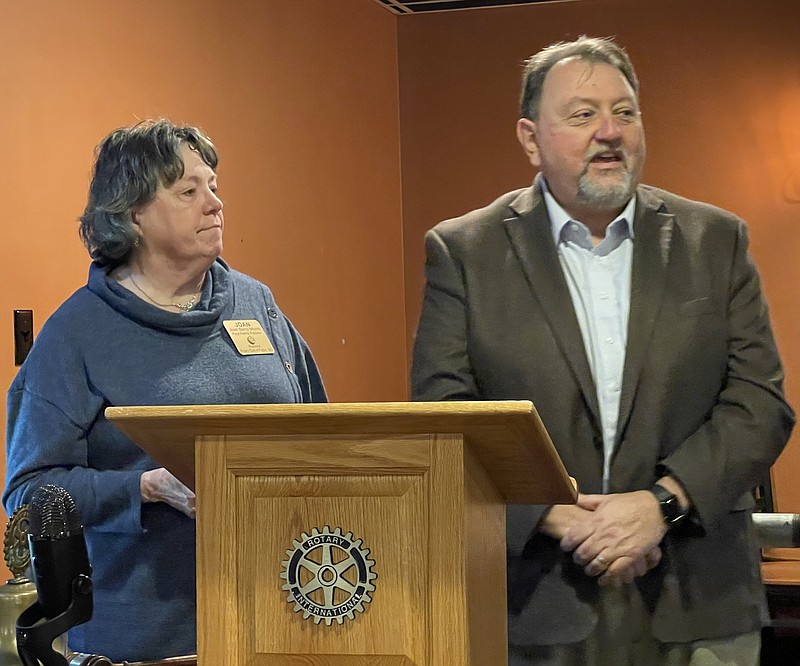 Photo courtesy Mary Ann Beahon Joan Berry Morris (left) listens as Shawn Cockrum (right) discusses the $45,000 grant given to the Fulton Rotary Club by the International Institute of St. Louis. This is the first time the International Institute of St. Louis has given a grant to a civic organization, and will be used for education and economic self-sufficiency for local Afghan refugees.

The Fulton Rotary Club received a grant at Wednesday's meeting for the group's efforts to support Afghan refugees, and also heard from the newly sworn-in associate circuit judge.

A memorandum of understanding was signed on behalf of the Fulton Rotary Club with the International Institute of St. Louis, an organization that provides opportunities to immigrants and refugees.

Shawn Cockrum, with the Missouri Office of Refugee Administration, spoke at the meeting about the grant and the importance of it.

The Missouri Office of Refugee Administration is a non-profit arm of the International Insitute of St. Louis, according to the office's website.

Cockrum shared his appreciation for the work that has been done in Fulton to assist the Afghan refugees.

"I just want to say thank you," Cockrum said.

He also said the Fulton Rotarians are "good samaritans" who are just looking to help those who need help.

This is the first time the International Institute of St. Louis has given a grant to a civic organization, Cockrum said.

Wilson spoke about "a new view," and the changes he has experienced so far in his new judge position.

Prior to serving as associate circuit judge, he most recently served as prosecuting attorney for Callaway County.

Wilson spoke about the differences between the two positions, and told a story about how he made several people happy on his first day as judge.