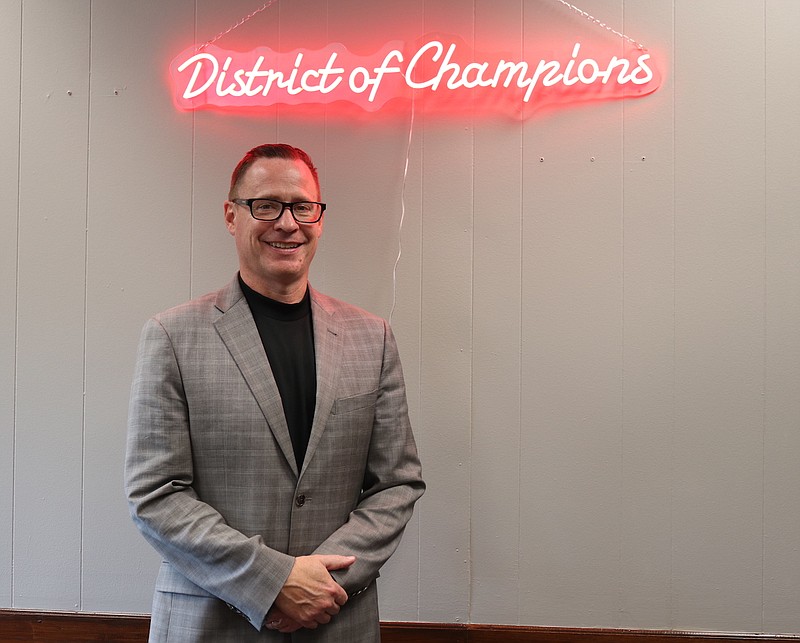 Anna Campbell/News Tribune photo: Jefferson City Superintendent Bryan McGraw stands next to a neon "District of Champions" sign that hangs over his desk. McGraw said the motto is intended to encourage excellence in all areas, which includes preparing students for college with Advanced Placement courses.

The number of Advanced Placement courses is surging at JC Schools, and more students than before are passing their AP exams, Superintendent Bryan McGraw said.

AP courses are college-level courses taught in high schools. Students in the class can take an end-of-year exam that can earn them college credit for the class, scored on a scale of 1-5.

McGraw has overseen a concerted effort to increase AP offerings in the Jefferson City School District and increase student participation. His goal as a new superintendent has been creating a "District of Champions," which includes academic success and college readiness.

"I think when you look at our strategic plan, we want to have kids career- and college-ready, and this is a way of getting them college-ready," he said.

McGraw is passionate about AP courses, and some of that passion stems from his own experience.

"I just felt that it really did prepare me because, really, the pace, the amount of work, the intensity of the instructors, definitely, I felt that my high school history AP courses were easier than the ones I had in college, and I was always thankful for that," he said.

"I think it gets kids prepared for the rigor of college and the pace of college classes, and I think the more we give them those opportunities to learn within our school, the better they will succeed when they get into some of those post-secondary learning opportunities," McGraw added.

McGraw said his goal has been for every student who plans to go to college to take at least one AP course in high school.

It was also a focus at McGraw's last school district, North Pocono School District in Pennsylvania, where he served as Superintendent for 11 years. He said there was also an increase in AP offerings and passing exams there.

It added five Pre-AP courses this year, an official "freshman-level" introduction to AP classes that does not include a qualifying test at the end.

Carrie Welch, director of counseling at Jefferson City High School, said Pre-AP courses are designed to be accessible for all.

She said such courses can be a way for freshmen to try out the AP experience and learn "I can do a higher-level course." They can be especially helpful for those who don't think they could handle a college-level course to learn what they are capable of. Pre-AP courses can build skills and study habits that translate to later confidence for students who are considering AP courses.

Currently, JCHS offers Pre-AP World History and English I for freshmen and English 2 for sophomores.

In total, 900 students are enrolled in AP classes between both high schools. That means about 35 percent of students are currently taking at least one AP course, though many take more than one.

At JCHS, about 86 percent of 2022 graduating seniors were on a post-secondary track.

The school district offered to pay for the exams of all students, which led to a huge boost in participation. The district plans to renew that plan this year.

"Our next goal would be to add in the arts, so we're targeting AP Music Theory, as well as AP Art Portfolio, which would hit another group of kids that possibly aren't in that science, math track but more gifted in the arts," McGraw said.

Those courses can also be used to knock out basic general education requirements in college, saving students time and money. There are also studies that show AP course success can correlate with success in college.

AP courses are also weighted, which means they can serve as a boon to GPA.

Now, those AP credits are more accessible than ever. With the passage of new legislation this year, all Missouri public post-secondary institutions must accept a 3 or higher for credit on AP exams.

"I think it's a great thing for kids, because it rewards them for taking that challenge," McGraw said.