Chiefs roll with Harris in Indy as Gay begins suspension 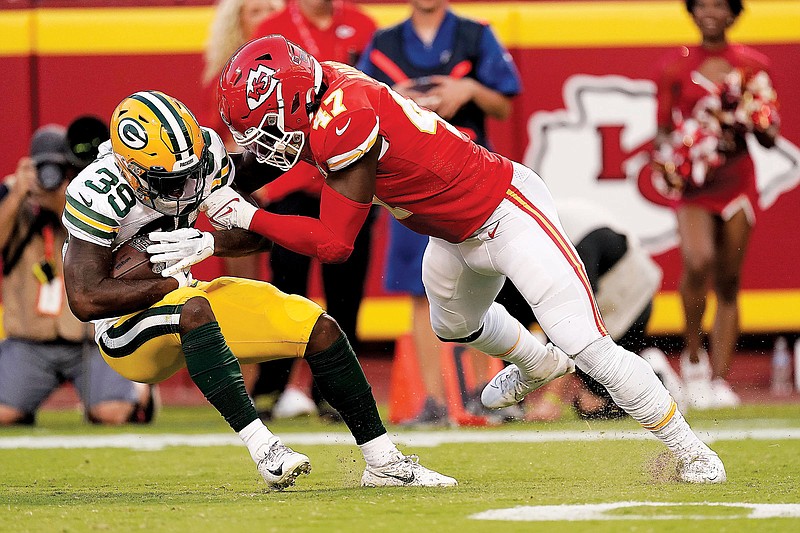 KANSAS CITY -- Matt Ammendola was essentially signed off the street to serve as the Kansas City Chiefs’ kicker while Harrison Butker was dealing with a sprained left ankle, and he was perfect on field goals and extra points in a win against the Chargers.

The Chiefs hope their replacement linebacker is just as successful.

After losing Willie Gay Jr. to a four-game suspension for an off-the-field situation earlier this year, the Chiefs are leaning on Darius Harris to fulfill his spot in the middle of the defense.

Harris has been an important special teams contributor, but has otherwise shuffled between the 53-man roster and the practice squad during three years in Kansas City.

He’ll start for the third time and first since 2020 when the Chiefs visit the Indianapolis Colts on Sunday.

“He’s smart. He’s instinctive. He’s tough,” Chiefs coach Andy Reid said, adding that Harris’ time in defensive coordinator Steve Spagnuolo’s system is also a plus. “Spags does quite a few things with schemes. You have to be able to process that.”

Harris has certainly made the most of his NFL opportunity.

He went undrafted out of Middle Tennessee State in 2019 and signed as a free agent, then spent what would have been his rookie year on injured reserve while recovering from a shoulder injury. He watched from there as the Chiefs rolled through the playoffs and beat the San Francisco 49ers to win their first Super Bowl in 50 years.

Harris returned the next season and began his on-again, off-again career in earnest, often getting waived only to be signed back to the practice squad and promoted on game days. He appeared in four games with two starts in 2020, seven games last season, and he’s played a role in wins against the Cardinals and Chargers to begin this season.

“He’s been here a while now. He knows the scheme like the back of his hand,” said Chiefs linebacker Nick Bolton, who will start alongside Harris in Indianapolis. “He’s similar to me that way.”

The Chiefs will need both of them to play well against the Colts, who along with newly acquired quarterback Matt Ryan also feature one of the NFL’s best running backs in Jonathan Taylor.

The way their defense is designed, the linebackers are often the first on the scene on running plays, playing off the work of the defensive line in front of them.

As for Gay, the Chiefs are trying to rally around him during his absence.

The third-year pro has spoken out about the mental health challenges he has faced in the NFL, and how being around the team has provided him a refuge.

But as part of the four-game suspension for a misdemeanor incident in which Gay broke a vacuum belonging to the mother of his child, he is barred from the Kansas City practice facility entirely for the first two weeks, then can return for meetings and workouts while sitting out two more games.

“He’ll handle it the right way,” Chiefs quarterback Patrick Mahomes said. “The whole situation was a bad situation that we don’t want to happen, but at the same time, we love Willie and we want him to come back and be part of this team.”

The fact Gay received a stiff four-game suspension for breaking a vacuum also did not sit well with many in the Chiefs organization.

They point to the fact Browns quarterback Deshaun Watson was initially suspended just six games for his alleged sexual misconduct, a penalty that has since become an 11-game ban to start the season.

Asked whether there was some inconsistency in the way players are penalized, Reid shook his head and smiled.

“Listen,” Reid said, “that’s a loaded question that I don’t want to lose money on.”

Notes: Butker has been kicking this week, special teams coordinator Dave Toub said Thursday, but it appears unlikely he will play in Indianapolis. That means another game for Ammendola, whom Toub said has a range of 50-plus as Lucas Oil Stadium. … DE Mike Danna missed practice again Thursday with a calf injury.