Battle of the Bulldogs: South Callaway football seeks to move above .500 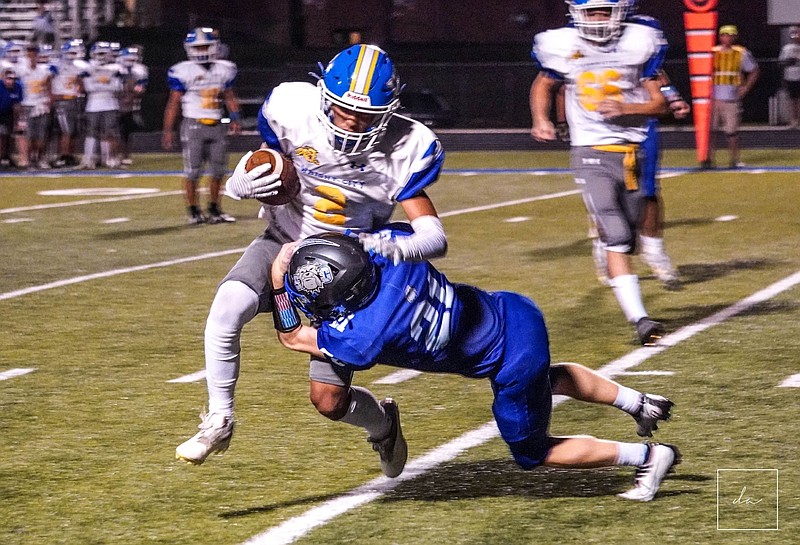 Against the Wildcats last week, South Callaway's defense allowed some big plays and couldn't get around Wright City's physical blocking.

"They were more physical than we were on the perimeter in terms of blocking and we just couldn't work out blocks very well," South Callaway coach Zack Hess said. "They got the perimeter on us several times, which is something that we've got to continue to work on -- get better at. And then we gave up a couple of big pass plays for touchdowns."

Usually a bright spot for the Bulldogs, the special teams allowed two touchdowns against the Wildcats. Though, in the Callaway Cup, Dalton Belcher forced a fumble on a punt and returned it back for a touchdown.

"Coach (Daniel) Burns does an awesome job at coaching special teams," Hess said. "We just had two really big breakdowns that really cost us the very first play of the game was a kickoff return for a touchdown for Wright City.

"So our kickoff coverage wasn't what it needed to be and there's too much space, and a big running lane for their really good athletes and they score a touchdown to start the game. Already, we're behind the eight ball and we haven't even played a snap of offense or defense and so that's frustrating."

Special teams and defense may have been an issue for South Callaway last Friday, but the Bulldogs' run game still did its thing against Wright City.

Running back Jacob Martin accounted for all four of South Callaway's touchdowns and ran for 180 yards against the Wildcats. As a team, the Bulldogs ran for 313 yards on 66 attempts.

"Jacob did a great job on Friday, in terms of just being kind of our workhorse," Hess said. "We can feed him the ball and he was able to get positive yards, and that allowed us to really dominate the time of possession. We were up I think almost 60% of the time we had the ball. So, the scoreboard doesn't really do that justice because they score quickly whenever they had the ball. But I felt like our offense there (did) a really nice job. And Jacob was a big part of that."

On Friday, South Callaway will face another Bulldogs team with a run-heavy, veer option offense. Hess noted two of the school's tailbacks -- D'Marko Green and Brady Sheppard -- as two Louisiana players that stand out to him.

"Both those guys are very similar type players, just speed backs that are hard to bring down and get to the hole really fast and it just makes it tough," Hess said.

In Louisiana's game last week at North Callaway, Green ran for 62 yards on 12 attempts while Sheppard scored a touchdown and ran for 38 yards on nine attempts.

Hess also noted Louisiana quarterback Kenny McCormick -- who moved from fullback to quarterback a couple of games ago -- and wide receivers Jack Logan and Donovan Richards.

Last week, Logan had one reception for 11 yards while Richards didn't catch any passes on three attempts. However, McCormick did throw a 35-yard touchdown pass to Sheldon Silvey -- it was Louisiana's longest passing play.

"(McCormick has a) big body, they use him like a running back so just puts a lot of pressure on the defense to not really dial in on one particular person," Hess said. "But we're going to have to be able to defend multiple athletes."

In order to beat Louisiana, Hess explained that South Callaway will have to tackle well, win the line of scrimmage and tackle its opponents' fast running backs.

"They got a few different guys they are gonna get the ball to in a pretty good running scheme," Hess said. "We're gonna have to be diligent every single play -- to do our job -- to limit the run game."

"Last year, we got up at a certain point; they kind of had to start throwing the ball a little bit more and it just ended up that worked out well for us," Hess said. " I think we were able to move the ball a little bit on them last year, but they didn't graduate much. They've got a lot of guys back and this time around is not going to be -- we can't just say -- 'Well, we beat him last year.'"

While South Callaway can't look at last year's game and expect a victory, the team will hope for the same result Friday.

Print Headline: Battle of the Bulldogs: South Callaway football seeks to move above .500